Ascent is a launch map that was also the fourth map to be released in VALORANT.

"An open playground for small wars of position and attrition divide two sites on Ascent. Each site can be fortified by irreversible bomb doors; once they’re down, you’ll have to destroy them or find another way. Yield as little territory as possible."

Ascent is a map set in Italy that features a large, open middle area that both teams can skirmish over. Mid is a playground for diverse ability use and successfully controlling the area opens additional routes for Attackers to both Spike sites.

The map's 'unique' feature include mechanical doors leading into sites. Each site has one door (A Link for A and Market for B) that is opened at the start of each round. Players can use a switch on the site side of the door (Next to the door on A and on a table in Toolshed on B) to close or open the door. These doors are impenetrable while closed but have 500 HP, allowing players to damage and eventually destroy them. Once destroyed, the doorway remains permanently open for the rest of the round.

The two walls separating Courtyard from Link also have a destructible panel each to cover them. Whilst intact, they absorb damage and cannot be penetrated by gunfire. The panels however have 400 HP each and can be damaged, with colored indicators on them implying how much health they have left (starts blue, then turns yellow and then red as they take more damage). They can eventually be destroyed to allow players to wallbang through these walls for the rest of the round. 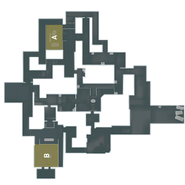 A version of Ascent from Development