< Range
View source
watch 02:46
The Quarry - The Loop
Do you like this video?
Play Sound

This article links to all of the lore elements that have been seen on the Range after they were first added in 3.09.

Brimstone, and around the main hall, which itself has a small office belonging to

Before 3.09, these listed rooms had either been barricaded or walled off. 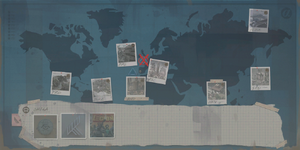 How did we not know any of this? The soldiers. That garden. And now this crisis of conscience? No, unacceptable. But let's start here: moving forward, Neon also trains with me. Limiting emotion does not work, she must use it. If Sage won't teach her that, I will.

Your radianite is stockpiled with our new friends. I suggest you find out who they are.

Brimstone as a child with a friend.

Brimstone working as a firefighter.

Brimstone working as a soldier.

Brimstone with his motorcycle.

Brimstone working as a Kingdom employee.

Edgar Allan Poe's "The Raven" next to the record player

A Baltimore license plate and a firefighter's logo seen in Brimstone's office.