View source
watch 02:05
Wiki Targeted (Games)
Do you like this video?
Play Sound

Shatter is a scrapped Agent in Valorant leftover from internal playtests.[1]

Shatter was first datamined on April 4th, 2020 in the Valorant package files [2].

Shatter's abilities are very similar to Phoenix, they also share an identical jacket and logo.

Although no actual abilities were found, an ability that seemed to have belonged to Shatter was data mined as well. The ability name and icon goes about Shatter creating a clone of himself, and being able to "shatter" it on command. 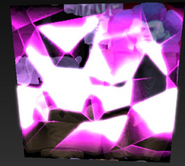