Skye is an Agent and Radiant in VALORANT.

A Radiant from Nimbin, Australia, Kirra Foster spent years fighting against Kingdom Corporation's ventures in Eastern Australia. Resisting from Sawn Rocks to Kangaroo Valley, her efforts against Kingdom earned her the title of the "Great Reclaimer". Later approached by the VALORANT Protocol to become an agent, Foster was initially unsure of joining as she didn't want to give up her fight against Kingdom and leave her homeland unprotected. However, when Sage decided to contact and direct her to a massive rift in the sky near her home, telling her there were many more like that one across the world, Kirra realized that the fight was bigger than just her home territory. Finally answering the call, she now serves as the Protocol's fourteenth agent, "Skye".

While Skye has said that she was not used to working with other people prior to joining VALORANT, she has quickly shown herself to be a team player through and through, guiding and reminding her team to move as one unit and work together as they complete their mission. With her affinity to feel and sense the natural world and everything else around her, Skye is naturally observant, and will quickly note whenever she senses something unusual with her surroundings.

Naturally a hard worker due to growing up in a farm, Skye seems to want to influence her teammates to be the same, as she apparently holds a woodworking class by the mess hall of their headquarters to practice having nimble minds through nimble hands, and those she catches slacking off has to join her morning run which begins at 4 in the morning.

Skye is seen wearing a green headband, with earrings on both ears, gloves, a vest of body armor, with a green tank top over it. She wears long cargo pants with kneepads, as well as boots, and wears a utility belt and a pouch located on her left leg. She also has two leaf pendants hanging from the bead necklace around her neck, contrasting with her green and nature-themed design. Skye also has various scars on her right arm and wears a sleeve that covers her left forearm. She is also quite muscular, likely due to a hardened lifestyle in the forest.

EQUIP a healing trinket. HOLD FIRE to channel, healing allies in range and line of sight. Can be reused until her healing pool is depleted. Skye cannot heal herself.

EQUIP a Tasmanian tiger trinket. FIRE to send out and take control of the predator. While in control, FIRE to leap forward, exploding in a concussive blast and damaging directly hit enemies.

EQUIP a hawk trinket. FIRE to send it forward. HOLD FIRE to guide the hawk in the direction of your crosshair. RE-USE while the hawk is in flight to transform it into a flash that plays a hit confirm if an enemy was within range and line of sight.

EQUIP a Seeker trinket. FIRE to send out three Seekers to track down the three closest enemies. If a Seeker reaches its target, it nearsights them. 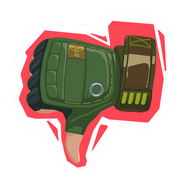 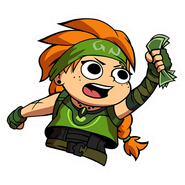